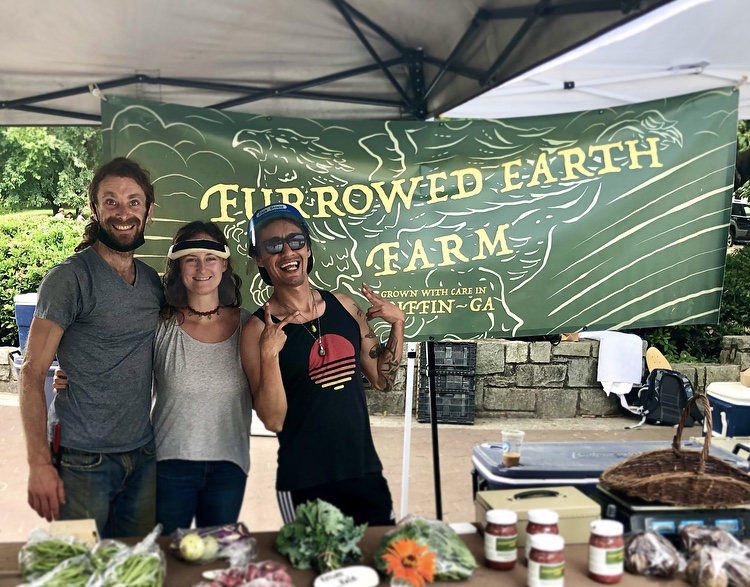 We are thrilled to introduce the folks at Furrowed Earth Farm as the newest additions to the G&G community of farmers! Furrowed Earth Farm, located in Orchard Hill, just outside of Griffin, is a 3-person team led by Garrett Stephenson. After a stint with his metal band, Garrett got his start in farming about 15 years ago. Eder Velasco and Courtney Gibson joined him along the way, and now the trio grows and harvests an impressive assortment of organic veggies, fruits, herbs, and even flowers. We asked them a few questions to get to know the farm, so keep reading to learn more!

Tell us about Furrowed Earth Farm! Where are you located and when was the farm started? What do you grow?

Furrowed Earth Farm is a 9 acre farm in Orchard Hill between Atlanta and Macon. We are a three person crew—owned and operated by Garrett Stephenson with the part/full time help of Courtney Gibson and part time help of Eder Velasco. Garrett started hanging the Furrowed Earth banner once he acquired the current property, although years ago he sold his produce under the names Prowell’s Pastures and Garrett’s Gardens when farming on other land. We field grow a wide variety of seasonal produce with organic practices: mostly veggies and some fruit, herbs, and cut flowers. 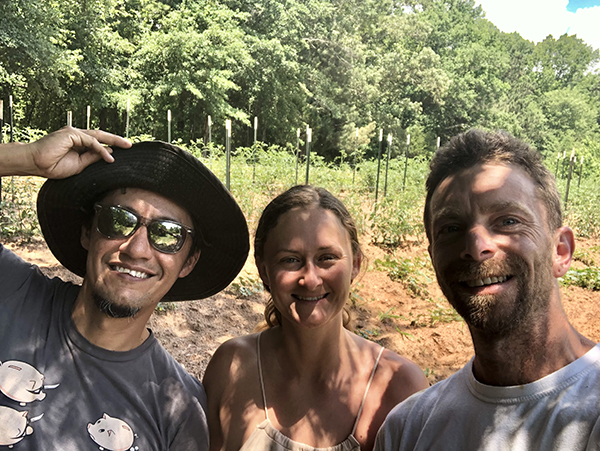 Eder, Courtney, and Garrett at the farm

How did all of you get started in farming? Did you always know it’s what you wanted to do?

For each of us, farming has been an evolving path!

Garrett’s path has unfolded over a decade and a half beginning with him and his former roommates Chris and Isia of Crack in the Sidewalk Farmlet, having large appetites and deciding to start a backyard garden. Once he realized he had an aptitude for farming, he worked with and for other farmers to gain experience learning under Charlotte and Wes Swancey at Riverview Farms, Joe Reynolds of Love is Love Cooperative Farm, Linda and Tony Scharko of Scharko Farms, his parents Jan and Ron in Benton, Tennessee, and Walden Farms in Chattanooga TN. Then he partnered with Whitley Able of Ups and Downs Farm and Hudson Rouse of East Atlanta Veggies on land in Fairburn before settling on to the property that would become the base of the operations of Furrowed Earth.

For Courtney, after watching the documentary Food Inc. and reading Michael Pollen’s book ‘The Omnivore’s Dilemma’ 10+ years ago, she began questioning food roots more deeply, but it wasn’t until a series of health challenges and quitting alcohol that she began shopping for organic and local food at farmers markets and learning about holistic and herbal medicine. After a layoff in summer 2020, she started helping a farmer she met through her former job. She met Garrett through that farmer in the fall of 2020 and transitioned to working with him fully in 2021.

Eder grew up in Mexico City, Mexico where his family sold produce and had a smoothie shop. His mom healed neighbors ailments with herbal and natural remedies, and was a big influence on him to learn more about plants and health. He started gardening 10 years ago in the US when he first made a garden in his backyard, and over time living with farmers, he learned from them a little more about the importance of the food that is consumed. In 2020, he changed job industries and found the passion he needed to make his way to agriculture.

What’s your favorite thing to grow?

What’s the hardest part about being a farmer?

What’s not the hardest part, you know? Relating to the other humans; being in a constant state of facing the unknown; having to be comfortable being ridiculously uncomfortable; and having to sacrifice a lot of other activities and experiences to commit to the success of the farm.

Do you have any produce coming up this summer that you’re especially excited about? 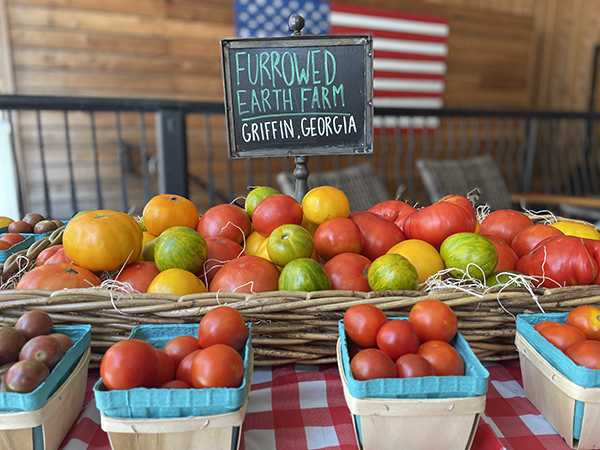 What’s your favorite thing to cook with your produce? Do you have any go-to recipes or dishes?

We like to work with what we have on hand from the garden so our “go-to” dishes change often. In the summer, it is usually some variation of a traditional succotash, often with an Indian twist. We love to start with onions, tomatoes, and potatoes; and then potentially add in squash, zucchini, eggplant, okra, garlic, beans, or other veggies, spices, and herbs.  Eating a wide diversity of food you’ve produced is one of the most rewarding aspects of farming; although setting aside adequate time and energy to prepare meals and preserve the harvest can be very challenging.

Garrett, we heard you were in a band before you started farming! Can you tell us about your music and what being in a band was like?

I can define our band with one word: raucous. We were more of a show band than a studio band. We played a lot of parties, house gigs, and bars with other punk rock, hardcore, and metal bands and had a lot of good times.

I refined my techniques of growing a diversity of crops throughout the changing seasons out of order of necessity. I am constantly reminded of the importance of the work we do here on the farm by positive feedback from our customers and our beloved local food community. We are blessed to have the opportunity to do this work, and we strive to enrich the culture of our times with the value of clean wholesome local food. 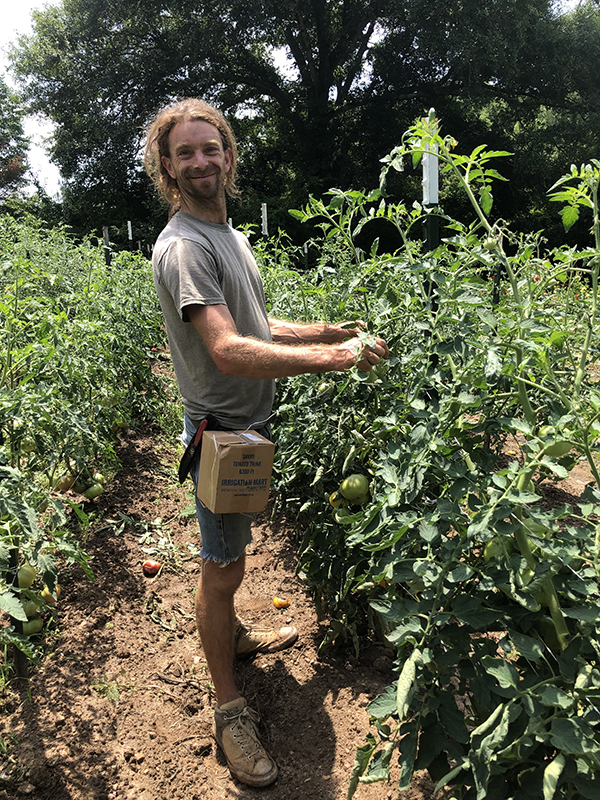 Garrett working in the fields

This week you'll find Furrowed Earth's green beans on our menu in the Chicken Yakitori Meatball Skewers meal kit. Toss them into a chilled soba noodle salad with our very own Good Chives Only spice blend–it's a perfectly refreshing summer salad that you'll be making again & again!

Furrowed Earth's cucumbers are in both our Cornmeal Dusted Trout meal kit and our Sesame-Peach Chicken meal kit. Cucumbers are perfectly in season right now, so it's a great time to try these from Furrowed Earth! 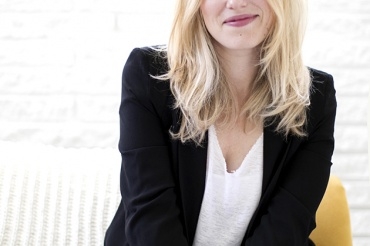 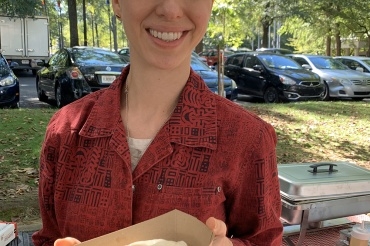 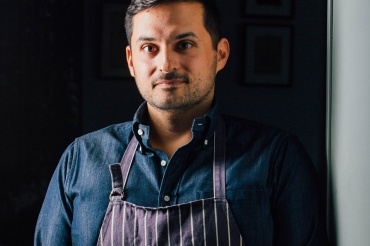